Passageway to the hollow centre of the earth 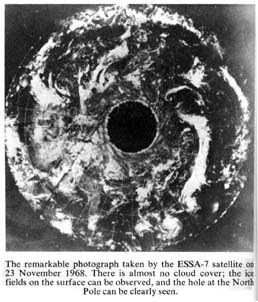 A "small band of believers" is planning a trip to the Canadian Arctic for "the greatest geological expedition in history," they say. They believe there's a "fog-shrouded hole" in the Arctic Ocean that's the start of a passageway to the hollow centre of the earth. "Everest has been climbed a hundred times," says the group's leader, Kentucky physicist and futurist Brooks Agnew.

He plans to hire a Russian icebreaker to take him and his followers to, and into, the hole to explore Inner Earth. "This is the first and only expedition to the North Pole opening ever attempted." (Canada National Post) .
Posted by Wayne Mansfield at 12:17 pm