MacDonald's Australia proudly claim to be creating new jobs with an extended menu and table service... ooops just wait while we do away with cash registers and deploy self order kiosks and self order apps disguised as loyalty card...

My experience is - self order kiosks that are often out of till paper - not turned on when stores open, and really a rather unfriendly experience.

Ohh! and priority to drive through - that really gets up my nose!!

so, a lover of friendly tech - iPhone, iPad, Microsoft Surface etc... I am trying the App to order. I have 5 or more bonuses dues but can't claim them... and nobody at my local Maccas in Walter Road Morley can help - staff, managers, or owners... its OK do get rid of jobs but the technology doesn't have to work??

In great social media language that is a massive #Fail MacDonalds.
Posted by Wayne Mansfield at 7:56 am No comments:

Meet Chris a FIRST for Cold Calling for Scaredy Cats


I have been presenting sales seminars since long before I can remember - actually the first one was in 1975 - 42 years ago and this last week, there was a first - I had Chris the working Guide Dog - attended with his companion Henrie.

In another post I will give you the back story of Chris, Henrie is sending it to me, but I just had to share the photo of this amazing creature - definitely not you run of the mill dog and just short of a wonderful person - and as Henrie said, he loves the ladies

Posted by Wayne Mansfield at 7:27 am No comments:

Last week I took a taxi from Kent Street Sydney to Qantas Domestic Terminal [ cheap not at $51.50 ] The train  was not an option with 4 pieces of luggage.

My driver was a qualified architect , Australian citizen who had been in Sydney for 8 years - his adult sons had graduated Sydney universities some 5 years earlier. Why a taxi driver?? Well his training in Shanghai China is not recognised in Australia but if he was from Bangladesh it would have been [ ? ] His first choice of occupation in Sydney?? A Newsagent but they are a dying business as people get their news on line and their Lotto tickets - online!!

Some positive news for our taxi driver - his cab was a Toyota Camry Hybrid - fuel cost were once $50 a shift but they had dropped to just $15. He said one issue though was less places to buy fuel and also Uber charged much less than a taxi... I had read that Sydney cab drivers can agree a fare less than what is on the meter to compete with UBER. [ ooops I forgot to ask my cabbie to match UBER ]
Posted by Wayne Mansfield at 6:26 am No comments:

What does CNN stands for?? Could it be Constantly Negative News??

Have you noticed that London has dominated the news lately and NOT for all the right reasons...

Terror attacks on a London Bridge, Terror attacks in Manchester, Terror attacks at Borough Market and then just for a change, A 27 story high rise apartment complex engulfed in fire with lives lost... oops I forgot one... the General Election which ended in a hung Parliament which was against all odds which Mains Stream media predicted would be a 100 seat majority!!

what do all these things have in common Negative news... and to keep the TV God feed it is beamed constantly CNN... and the result??

In Australia the third television network Channel 10 slips in administration - we are getting sick of CNN and have finally turned off and the advertisers aren't paying anymore.

What abut facebook?? Most common activities are viewing family pictures [ POSITIVE ] cat videos [POSITIVE] How to videos[ POSITIVE and advertisers are flocking there.


My challenge to everyone - get with the POSITIVE program.
Posted by Wayne Mansfield at 6:51 am No comments:

I am on a rest day in Sydney between seminars and everywhere in the streets are homeless people who the world has left behind. Do big cities need to stoop this low??

Posted by Wayne Mansfield at 5:47 am No comments: 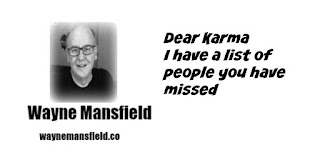 Posted by Wayne Mansfield at 6:16 am No comments: 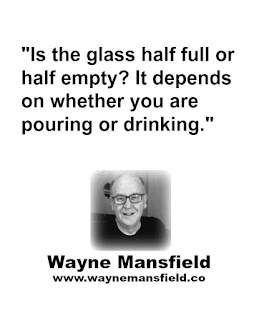 "Is the glass half full or half empty? It depends on whether you are pouring or drinking."

Posted by Wayne Mansfield at 4:39 pm No comments: 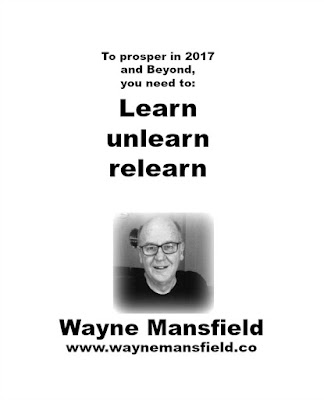 Posted by Wayne Mansfield at 12:37 pm No comments: