Weak links versus strong links — A common misconception is that “audience” equals “action. It does not. If you are reading this post, you might have discovered it through Twitter or Facebook. But if you have no emotional connection to Mark as a blogger, are you going to hire him? Buy his marketing books? No. Social media marketing simply opens up the door for connections through weak relational links. You still have to do the hard work to turn those folks into buying customers. -

http://www.businessesgrow.com/2015/06/01/best-social-media-platforms/#sthash.dTUBotPG.dpuf
Posted by Wayne Mansfield at 2:17 pm No comments: 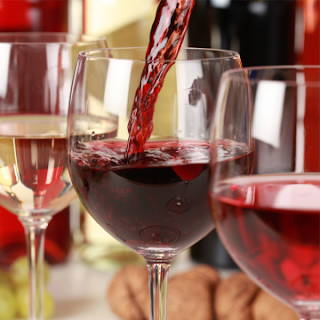 Imagine checking in with your dermatologist for help clearing up a breakout…and leaving her office with a script for pinot noir. Sounds farfetched, but there’s new science behind it. A just-released study demonstrated that an antioxidant found in the grapes used to make red wine slowed the growth of bacteria that cause acne. Not only that, but the antioxidant, resveratrol, also boosted the anti-bacterial properties of benzoyl peroxide, the active ingredient of many over–the-counter acne medications.
The study, published in the journal Dermatology and Therapy, played out like this. In a lab, researchers began growing the specific type of bacteria that causes acne. When resveratrol was applied to the thriving bacteria colony, it slowed bacteria growth. The study team then added benzoyl peroxide to the resveratrol and applied the two to the bacteria, creating a potent combo that put the brakes on bacterial growth for a sustained period of time.
Posted by Wayne Mansfield at 1:46 pm No comments:

A Walk with Zig Ziglar


Like lots of other people [ the app said 342,000 this morning ] I use Runkeeper to keep track of my progress on my daily walk.

My latest audible program is the Zig Ziglar See You over the Top program.

An interesting thing happened on my walk... I walked faster and with more energy as I listened to Zig! I think in a past life I wore out a set of tapes by continually playing them in my car.

But this morning my energy was topped up, my brain slipped into a higher gear, and fond memories flooded back.
Posted by Wayne Mansfield at 1:17 pm No comments:

Press Down for Short Straw 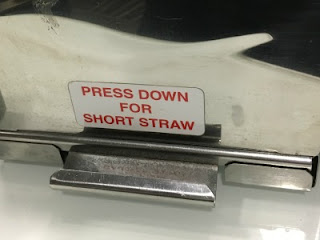 If you had the chance would you volunteer for the "shit" job?

Recently I saw this amazing sign, I am sure the irony escaped the person who posted it... "Press Down for the Short Straw"
Posted by Wayne Mansfield at 11:56 am No comments:

In Brisbane on Monday my experience with taxis epitomised why new comers like Uber are making in roads.

When we got in the taxi, the driver asked for our destination:

My reply - the Christie Building on the corner of Wharf Street and Adelaide Street. The drive reached for his GPS... now, if you know Brisbane at all, Adelaide Street is one of the main streets in the Brisbane CBD near a major taxi rank, and Wharf Street is a major road in the CBD going to the river. So, we have a driver who doesn't know the way from the airport to the centre of the CBD.


Later in the day: From the Christie Building to the domestic airport [ Qantas Terminal ].

Driver: where are you going....

Driver: which is the best way said the driver??

And then he started to punch that into his GPS. I told him not to worry as I knew the way.

Then I asked him... "Radio station are you listening to?? "Oh the local Indian station!"

I asked him how long he had been driving - I am just new... but I have lived in Brisbane for 2 years.

My question to those how are the Taxi Industry "Is this the level of service you give for a premium service?" And then I would say, is it any wonder Uber are making such a glorious start.

And on that day in Brisbane the Taxi Industry was protesting to the government to have UBER banned... hopefully they will react and give better service... but that is a empty dream I fear.
Posted by Wayne Mansfield at 8:02 pm No comments: