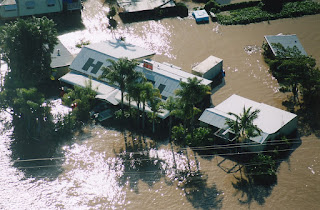 Whether it is global warming or just nature at her most furios, NSW hs had drought breaking rain which is causing death, destruction and heartache for thousands...

The bodies of an elderly couple whose car was washed off a bridge in the Hunter Valley have been recovered as wild weather continues to lash the eastern part of the state.

A Newcastle man is missing after being swept down a stormwater drain in the city's north, police say. The 40-year-old was a passenger in a Ford Festiva that stopped at 5pm yesterday in Griffith Road, near Lambton.

Police said the man fell into the stormwater drain after getting out of the car and was swept from view. He has not been seen since and police continue to search the area and downstream.

Meanwhile, the search has resumed for a family of five missing after a NSW Central Coast road collapsed, sending their car crashing down an embankment and into a flooded creek.
Posted by Wayne Mansfield at 8:28 am