When faced with the end of their season, the Fremantle Dockers dug deep and brished off Richamind in their round 11 game at Subiaco yesterday.

Here is the story in this mornings West Australian: 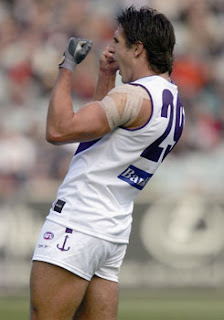 Fremantle skipper Matthew Pavlich hasn't had many critics during his time in the AFL, but he answered them anyway, leading from the front as the Dockers eventually overcame winless Richmond by 23 points.

Former St Kilda coach Grant Thomas raised eyebrows in the west as well as around Moorabbin last week when he said he thought Pavlich might prefer to play well personally rather than play in a winning team.

Against the Tigers he did both, elevating himself above a willing backline when it mattered in the final term to see the Dockers home 18.15 (123) to 15.12 (102).
Finishing with 22 possessions, 15 marks and three last term goals, Pavlich's two notable assists in the second stanza were as pointed as they were important.

And after his side eventually prevailed in what he called a "genuine danger game", Dockers coach Chris Connolly could only praise the way Pavlich had risen above Thomas' barbs.

More here: The West Online
Posted by Wayne Mansfield at 8:34 am