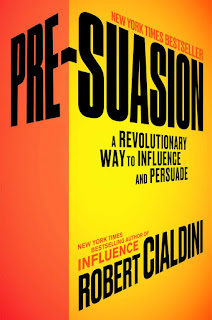 Robert Cialdini is credited with changing the way marketing worked with the publishing of his best seller Influence. Published 15 years ago, Cialdini has continued studying what makes people do what they do... and this latest book records what he thinks are the must important changes.
An area I particularly like is the discussion of preloading a situation - in NLP terms, this might be called anchoring. Basically by predisposing someone to a particular view you can influence their decision and predict the answer.
If you are involved in anyway with marketing this is a must read.
Posted by Wayne Mansfield at 1:53 pm No comments: 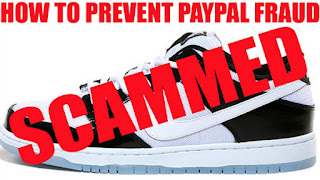 On November 27th I purchased a digital download using using paypal as payment, thinking I was being protected by buyers insurance offered by paypal... a small but significant purchase of $250 US The file was delivered for a week, then it was delivered as an unusable 6 gig file, and then as a smaller file but, due to the time that had passed, a paypal resolution request had been raised, the files were password protected. PayPal told me told they had extended the time for the seller to respond and they wouldn’t review the claim until December 24th. I have pointed out the details of my claim, the fact the seller is passing himself off as a legitimate business [ using a very close version of their name ] and that after a month I haven’t got my purchase... but to no avail. A promised call from a supervisor hasn’t been received... a text / tweet exchange with @AskPayPal has produced nothing and I am still expected to wait until the recalcitrant seller replies to a second request - paypal’s 10 days to resolve the matter has long since passed. This is my last message from @AskPayPal: Ask PayPal @AskPayPal I am sorry that I cannot resolve this for you. I have passed on the information to our Claims Department and they will contact you directly. Thanks ^SLS So, please don’t put any faith in the buyers protection nonsense that paypal peddle. A month after the event, I am still without what I paid for, and the matter could drag on for another couple of weeks. paypal have obviously got “too big to care” and they use call centres in the Philippines where low paid staff have no authority to resolve obvious cases of fraud. I have supplied details of the sellers fraudulent name copy and also the real site but nobody cares or is prepared to make a decision. A request to speak to a supervisor at 11am - now some 8 hours ago, was met with “They will call you back” and obviously you know the result of that... I am still waiting. I am very happy to post my correspondence with the seller here if required but I raise this issue... the buyers protection offered by pay pal is not worth the digital space it takes up... Fingers crossed this will eventually be solved.
Posted by Wayne Mansfield at 7:06 pm 1 comment:

Useful Belief by Chris Helder 2016 saw me presenting our most popular half day seminars Stepping Up to Supervision and Successfully Managing People. A common theme was that “the young people of today” are just horrible: lazy, opinionated, entitled selfie-lovers and of course narcissistic. In Helder’s book “Useful Belief” proposes if you treat these young people as “lazy, opinionated, entitled selfie-lovers and of course narcissistic” you get that result. He proposes that a Useful Belief would be that they are the most amazing you people that ever were... and that if you treated them as such, you would have these amazing young people who surprised you everyday with how good they were! Of course there are example of this in the workplace of 2016 - Apple Shops characterise their young people as GENIUSES and magically they act that way - they are still all the other things that set young people aside but somehow that simple re titling turns them into Super Stars. There are many other examples that are practical and useful in this book and i commend it to you - either to further your management career or just to be a better parent. Available at all good book stores - I have purchased and gifted more than a dozen - I grab them at Bookshop at Melbourne Airport - a great place to find new books.
Posted by Wayne Mansfield at 10:28 am No comments:

Nothing is constant BUT change

Yesterday I was looking for something familiar so I went o Facebook to check the posts of Family, Friends and clients... but Facebook had changed again. where my SMART custom lists used to be was NOTHING. My first reaction was to rant and rave [ as you do when something changes ] but after reflection of though of all the things in my great life that have changed and have never changed back... Margaret River of my boyhood - it is different now, the world loves it but it is not what my childhood memories were made of, Perth the lazy BIG COUNTRY town that is now an expensive big city, simpler phones but now mini computers like iPhone 7’s, flying used to be exciting and romantic, it is now ordinary and like catching a bus, everyday was exciting with new challenges but not nothing is extraordinary. I am not complaining just saying. My go to futurist, Alvin Toffler said: “The illiterate of the 21 st century will not be those that can’t read or write but rather those who can’ learn, unlearn and relearn.”
So, the journey to change has started again... I have to get used to ditching knowledge that is no longer valuable - I struggle to give up PageMaker where I must surely have been a world expert but they stopped updating that program 10 years ago - I think that sometimes when you are forced to change - like the Czars at Facebook force us to do on a very regular basis, that change is more palatable. I love podcasts and listen most mornings to James Altucher, Tim Ferris, Joe Polish, Dan Sullivan, Stephen Dubner, etc.. and I heard Kevin Kelly who for those of you who aren’t aware was the founding executive editor of Wired magazine, talk about the consistent need to upgrade himself.. how he would hold onto a program where he had expertise, but the hardware would continue to improve, newer more capable programs would be released, and he would fall further behind and to catch up became more and more a challenge. He eventually decided to be on a constant improvement curve. I feel like Facebook has forced me to have my Kevin Kelly moment.
So, thanks you Facebook for taking away my custom lists... I am grateful!
Posted by Wayne Mansfield at 4:10 am 1 comment: