In the week where Australia's going mad for the Olympics we were distracted  when Australian golf star Minjee Lee earned  her 1st  major championship win. She won the Evian Championship in France with an amazing final round performance.

The 25-year-old who is from Perth, and has ong considered perhaps the best female player never to win one of the five majors but she got rid of that unwanted tag with a fantastic display at Aix-les-Bains which saw her shoot a flawless final round seven-under 64. this lead to sudden death playoff at the first hole.

Coming from a record-equalling seven shots back on Sunday, she caught up with the week's stand out performer, South Korea's Jeongeun Lee6 as the pair both finished on an 18-under par total of 266. 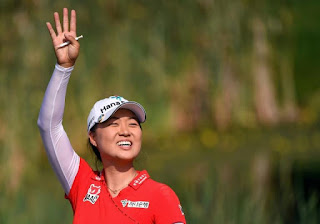 "I just played to the best of my ability and it's really great to win a major. It's just really amazing," said Lee, after being doused in bubbly by pal Lydia Ko and then taking a swig of champagne herself on the 18th green to celebrate her triumph.

Posted by Wayne Mansfield at 6:50 pm