How do you spell that? 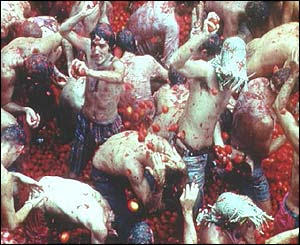 After a food fight in the cafeteria at Markham Intermediate School on Staten Island, N.Y., the dean sent a letter to parents to announce the entire eighth grade class would be punished for the mess.

Dean Michael Levy declared the fight in the "caferteria" to be "unexcecpable" and that parents must sign the letter or their children will be excluded from "all senior activates" such as the prom.

One student noted that "even some of the teachers were laughing" at the dean's poor spelling and grammar. Principal Emma Della Rocca said the dean didn't have her permission to send the letter, and she countermanded the collective punishment.

Since Dean Levy thinks punishments should be public, why doesn't the principal announce his?
Posted by Wayne Mansfield at 4:17 pm