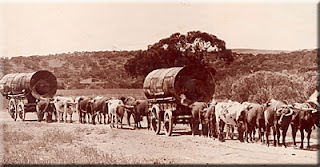 Bullock trains were the semi-trailers of the 19th century.

They carried wheat from farmers, wool from stations, timber from cutters and much much more.

They had a language all their own and were very superstitious. If the moon did not appear behind a certain tree or a star did not appear at a certain location they thought that bad luck would follow them.

Bullock trains brought goods from large towns to the settlers and delivered the settlers' goods to the towns. They were the major source of transportation for country settlers. The average bullock train consisted of six to eight animals. The maximum load was 1.5 tonnes with a average speed was 3'/z miles per hour. Some teams had as many as 42 bullocks.

Bullocks were preferred over horses because thy were stronger and they only ate half as much food. The men who ran the trains were called bullockies
Posted by Wayne Mansfield at 10:00 am