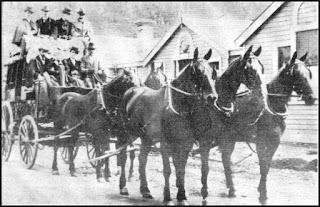 Cobb and Co was E\established in Victoria in 1853 by Freeman Cobb and three other Americans.

The company soon spread throughout New South Wales and Queensland.

At their peak Cobb and Co had the largest transport system in the world. After Cobb and his partners had made a fortune they sold the business.

Bathurst was the centre of operations for more than 50 years.Cobb and Co had branches in all mainland states, New Zealand, South Africa and Japan. The last Cobb and Co coach ran in Queensland in 1924.

Posted by Wayne Mansfield at 11:39 am