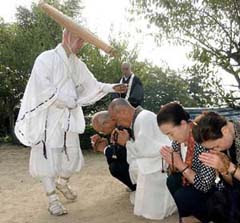 Marathon runners may think they have endurance, but they can't compete with members of the Tendai Buddhist sect who live on Mount Hiei in Japan.

As part of their spiritual training, the so-called "marathon monks" run or walk (in rope sandals) a distance that's sometimes double that of a marathon's 26.2 miles every day for seven years, often getting only four hours of sleep a night.

Only 48 monks have completed this optional quest (while still tending to their other duties), which requires them to commit suicide if they fail at any point along the way.

(Source: The Observer)
Posted by Wayne Mansfield at 3:20 pm