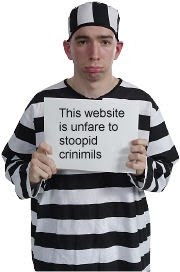 Two employees of a restaurant outside New Castle, Del., went into the office after closing and found a man inside. The man ran out the back door, but was caught by police nearby. Police identified him as Branden M. Tingey, 28, who was a manager at the restaurant three years ago, but was fired. "This was a burglary," said police Cpl. Joseph DiStefano.

"He meant to rob the safe." The problem was, he didn't know how. Investigators checked a computer in the office and found Tingey was trying to get instructions over the Internet. "The manager moved the mouse on the darkened screen" for investigators, DiStefano said, "and 'How to Crack a Safe' came up on the screen on the Yahoo page." (Wilmington News Journal)