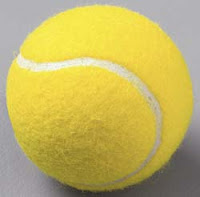 Ken Rosewall played in the US Open final at the age of 40 (he lost).

Modern tennis was originally started by the French during the 10th century, and the game owes its name to the French word 'tenez', meaning `take it' or `play', which is what each player called out when they served.

King Henry VIII was a great fan of tennis, and even managed to lodge a tennis ball in the rafters of London's House of Parliament!

Modern lawn tennis was patented by Major Walter Clopton Wingfield in 1874, who originally named the game 'sphairistike' - the Greek word for `ball game'.

The first tennis championships for men's singles were held in Wimbledon in 1877 with 22 players competing.

The first women's singles match and men's doubles match was held in 1884.

In 1930, tennis balls were refrigerated for the first time in order to keep them at an even temperature before play.

Yellow balls were used in the Wimbledon games for the first time in 1986.
Posted by Wayne Mansfield at 8:02 am