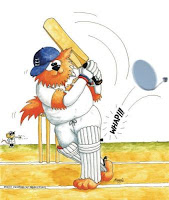 All countries in the world have a cricket presence.

Cricket is watched by almost a billion people.

Cricket comes from the French criquet.

February 1981 was not a good moment in Australian sportsmanship when Trevor Ch; bowled an underarm ball to New Zealand t guarantee an Australian victory.

The first Australian cricket team to tour England in 1868 was made up of Aboriginals.

The first Australian cricketer to score a century England was Charles Bannerman.

In 2003 Australia won the World Cup for the third time in a row. They went through the series unbeaten.
Posted by Wayne Mansfield at 8:05 am