Was that Kathrin, Finja, or Leonie? 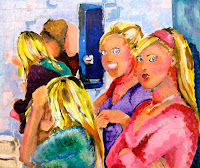 From the files of "This is True"

A German psychotherapist has been accused of criminal misconduct for taking advantage of a patient with multiple personality disorder. Monika Mirte, 44, who also has personalities named Kathrin, Finja, and Leonie, went to see Dr. Peter Blaeker, 43, who, she says, used "Kathrin for sex and Finja to do the shopping and pay for it, while Leonie gave him money to travel on holidays to Mallorca and Sylt." When Mirte realized what was going on she confronted Blaeker, but he told her that he had a "duty of confidentiality" to her other personalities.

I'm guessing he charged them all for treatment, too
Posted by Wayne Mansfield at 2:35 pm