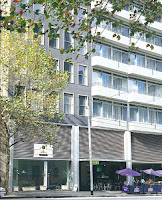 While Andrew and I had to attend a conference in Melbourne for five days, we decided that rather than leave the kids at home we would take them and their Aunty Fun, for a city experience. We're from the country. The kids go to a 30 kid 2 teacher school... in Michelago NSW.

We hired a nice apartment at Quest on Wellington in East Melbourne and everything went well, Kids and Aunty Fun had a fab time, apartment was lovely etc.... but when we left - I left behind my phone charger.

Doing without your mobile phone is difficult. I rang them, they found it and posted it off. Lovely.

A week later I got a COD card from Australia Post. It informed me I had to go and pick up a parcel, I assumed my phone charger, at the local post office, an hour's drive from home and pay the $10 postage.

While I can understand people leaving stuff must be a royal pain for the motel's staff, I really though the $1000 + we paid with five people staying a week in the middle of winter would of/ could have warranted a different response....

How charmed I would have been to be sent it to my work address, or sent a chocolate too and a card saying thanks for staying. Would I have booked again? You bet. Will I book again now? Doubt it. What is a hassle to them is a missed opportunity to show service and initiative and win a customer for life.

It's not that hard, so why don't more people do it?