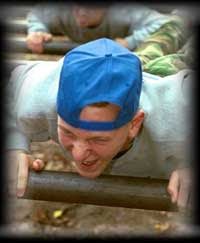 When every other way to get “brats” to behave had been exhaustes, a military style boot camp was tried to see whether good old fashioned discipline and peer pressure would work.

So what started out as a last resort, as an alternative to jail for juvenile adolescents, has become a leading light in bring self respect, self-image boosts and new pride in young people.

Parents at the end of their patience and resources are seeking out Teen Boot Camps hoping that they will give their troubled teens the "wake up call" that will turn their life around.

Orginally seen as a “short fast whack” to get kids back on track, where the teens are mentally and physically challenged, boot camps now offer long-term boot camps have increased in popularity for their ability to help defiant adolescents improve their behavior at home and school.

Much like basic training for military recruits, the camps goal is to scare kids straight. By being modeled after military-style, military exercises, and intense physical training focusing on reality, respect and responsibility the teens who usually lack these qualities see that to succeed in life they desperately need them in order to successfully transition into adulthood. This experience can help teens replace destructive attitudes and behaviors with new perspectives and direction in their lives.

Posted by Wayne Mansfield at 10:07 am