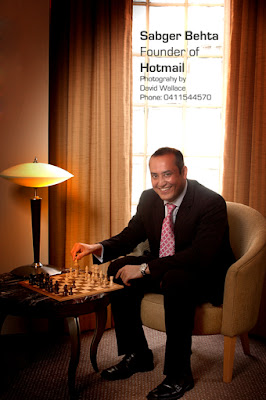 Sabger Bhatia, the multi-millionaire Hotmail co-founder, would probably make just as much money playing poker in Vegas. His powers of persuasion and negotiating grit have become the stuff of Silicon Valley legend.

He first made his fortune — and steely reputation — when he sold Hotmail, the company he co-founded in 1996 with Jack Smith to Microsoft for a tidy sum.

How did the Indian-born then 27-year-old engineer pull it off? All with a coolly executed mix of brilliant idea, Zen-like negotiations, and sly approach to venture capitalists that would make Machiavelli green with envy.
"I think you have some gut instincts and you have to go on those," says Bhatia. "And you have to give it a shot ... to an entrepreneur it's like a gamble, but you've got to take that chance." Bhatia crafted the strategy of pitching a decoy idea to venture capitalists in order to see which ones he could trust his true idea with. His real idea turned out to be Hotmail, which offered free e-mail accounts that could be accessed over the Web.

"I was introduced to a number of people who pretended to be venture capitalists, but were in fact, people who had little money or just wanted the idea," explains Bhatia. "I was skeptical and I was scared. I truly believed it was going to be very powerful."
Posted by Wayne Mansfield at 9:14 pm