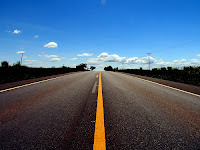 Officer Keith Mouliere was on patrol in Alexandria, La., when a car went by the other way. It was 1:00 a.m., and he could hear the car's stereo blasting. He turned around to pull it over, but the car sped off, leading a pursuit at speeds of up to 80 mph through town.

The driver missed a turn and crashed, then ran on foot -- right in front of Mouliere's car. Mouliere hit the man, but the suspect was able to get up, grab a brown pouch he had dropped, and run off again -- with Mouliere right behind. The foot chase didn't last long because "he fell as his trousers fell down around his knees," Mouliere noted in his report.

Roderick Dewayne Lowe, 29, was charged with possession of drugs with intent to distribute, aggravated flight from a police officer and other charges -- including the original loud stereo charge. (Alexandria Town Talk)

And on the way to the station, the officer just couldn't help but turn up his radio when "Hit the Road Jack" came on.
Posted by Wayne Mansfield at 1:08 pm