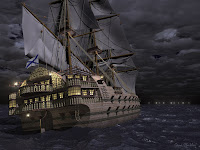 ” In the 19th century, the British Royal Navy attempted to dispel the superstition that Friday is an unlucky day to embark on a ship. The keel of a new ship was laid on a Friday, she was named H.M.S. Friday, commanded by a Captain Friday, and finally went to sea on a Friday. Neither the ship nor her crew were ever heard of again “

The story of HMS Friday was a joke told by Irish comedian Dave Allen on his BBC show “Dave Allen at Large”, first broadcast in the 1970’s.
Posted by Wayne Mansfield at 11:24 am