Does My Bum Look Big In These? 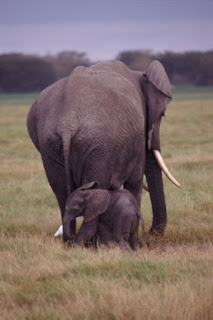 When animals look in the mirror, they usually decide that very fine-looking figure is another animal. Cats might try to start a fight; dogs might try to make friends. But recent research puts elephants in a different league altogether.

They recognise their reflections. Until now, only humans, great apes and dolphins had been proven to have such a level of self awareness.

Researchers put a 2.5m-high mirror in the elephant enclosure at the Bronx Zoo in New York and watched as three elephants approached. Instead of greeting new friends, they looked inside their mouths, their ears and showed other signs of self-awareness, such as looking behind the mirror.

One elephant, Happy, even touched a mark on her head repeatedly.
Posted by Wayne Mansfield at 12:14 pm