Who was Sheldon Adelson?

He was many things - another than making his money from Casinos [He died recently leaving more than US$1 Billion to his heirs.]

Adelson grew up poor, born at the height of the Great Depression. But he hustled from a young age, selling newspapers and buying vending machines to place in factories and gas stations. Adelson worked his way to wealth through a series of business ventures, including windshield deicer and a charter tours business. Adelson’s fame began to grow when he and partners developed the COMDEX computer trade shows in the 1970s, and in 1988, he purchased the Sands Casino and Hotel in Las Vegas, beginning his career as a casino magnate. He would later expand, building the Venetian in the place of the Sands and building casinos in Pennsylvania, Macau, and Singapore. In 2015, Adelson bought the Las Vegas Review-Journal newspaper. 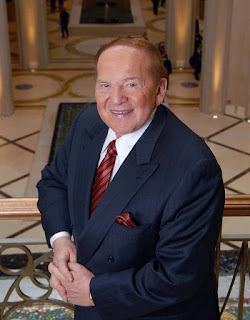 Though Adelson grew up in a family of Democrats, he became a Republican as an adult, and he donated much of his fortune to right-wing campaigns and causes. He supported candidates including George W. Bush, Newt Gingrich, Mitt Romney, and Donald Trump – Adelson was the largest donor to Trump’s 2016 campaign, contributing $25 million. He also donated to the GOP as a whole and to combat cannabis legalization efforts.

Adelson on his political involvement

“I’m against very wealthy ­people attempting to or influencing elections. But as long as it’s doable I’m going to do it. Because I know that guys like Soros have been doing it for years, if not decades. And they stay below the radar by creating a network of corporations to funnel their money. I have my own philosophy and I’m not ashamed of it. I gave the money because there is no other legal way to do it. I don’t want to go through ten different corporations to hide my name. I’m proud of what I do and I’m not looking to escape recognition.” —from a 2012 interview with Forbes

Posted by Wayne Mansfield at 10:17 am