Here are 2 well-known super achievers who came into their own in old age:

Nelson Mandela: Perhaps the most recognizable name on this list, and in the world, the late Nelson Mandela lived a life that was dedicated to freeing his native country of South Africa from the clutches of the oppressive apartheid regime that was running it. For his activism, he was thrown in prison for more than two decades. When he was released, he was 72 years old, pretty much at the end of his life. That did not stop him from becoming the first black president of South Africa four years later and the recipient of a Nobel Peace Prize in 1993. Colonel Harland David Sanders: If you like KFC, you have probably heard the story of Colonel Sanders. Legend has it that he was rejected 1009 times before someone gave him a chance to try out his fried chicken recipe. He walked and knocked on doors for years before he finally founded the KFC we know today. He did all this after his retirement at 65 years of age. He became a multi-billionaire at 88 years of age. 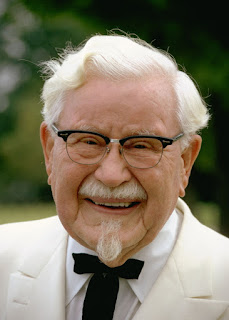 Posted by Wayne Mansfield at 10:41 am