It was a cold and silent night. The weather was freezing cold. A group of monkeys was on a tree. They were clinging to its branches. One of the monkeys said, “I wish we could find some fire. It will help us to keep warm.”

Suddenly they noticed a flock of fireflies. One of the young monkeys thought it was fire. He caught a firefly. He put it under a dry leaf and started blowing at it. Some other monkeys also joined in his efforts.

In the meanwhile, a sparrow came flying to its nest, which was on the same tree the monkeys were sitting on. She noticed what they were doing. The sparrow laughed. She said, “Hey silly monkeys that is a firefly, not real fire. I think all of you should take shelter in a cave.”

The monkeys did not listen to the sparrow. They continued to blow at the poor firefly.

After some time, the monkeys became very tired. Now they realized that what the sparrow had said was correct. They set free the firefly and moved to a nearby cave. 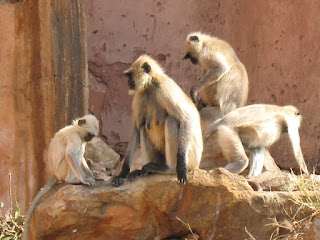 Moral of the Story: While persistence is one of the most defining qualities of a good student, there’s always something new to be learned every day! The monkeys in the story sure are persistent but their hard work didn’t pay off because they refused to listen, at least initially.

Always listen to your elders, they know better!

Posted by Wayne Mansfield at 10:12 am