The Ultimate Gift - A Story to Inspire 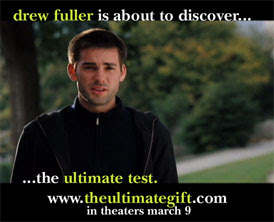 I've noticed that in the last few years there have been some really brilliant movies that are of great inspiration to many people. With their powerful underlying message, intriguing storyline and very convincing characters that create a very emotive response from the viewer.

A few years ago, a small underground book titled "The Ultimate Gift" was circulated into publication and became a huge hit selling 4 million copies. The premise being a young man receiving a trust fund from his recently deceased wealthy grandfather. Instead of money however, his grandfather has left him 'gifts' designed to challenge Jason (the stories protagonist) and send him on a journey of self discovery. This is the official site of the movie "The Ultimate Gift" and the grass-roots movement its starting to help charities and give to others.

As well as being a successful book, this story also spawned a whole new movement, with its big message prompted people to give to others and to help those in need. The feeling is that every body has powerful gifts to share, and that this is our opportunity to use this as inspiration to go out there and change the world for the better.

This promises to be a truely inspirational movie, and I would hope, a positive influence on any viewers life, prompting them to give a bit of themselves tp others, and to help those in need.