Depending on your history books.. Twaiwan is an example of Chinese democracry or a failed state that mainland China wants back! My history was taugt from an anti communist standpoint so Twaiwan is tremendous..

A current visitor is ex Australian PM Tony Abbott [who made recently departed prince Philip a Knight of Australia - how stup is that as a Captains Pick?] who has been speaking his mind [ funny how not being a politician can do that ] calling mainland China a bully etc... 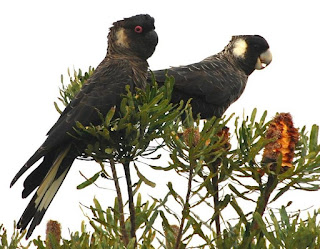 That was news but the story I like better, you could say it is the same thing really, was the discovery of a 36 year old Black Carnaby Cockatoo by the guy who tagged him all those years ago... no it doesn't have a name but can I suggest Tony. The article went on to champion the breeding success of the birds... a really, really good news story - the first one is problematic depending on you politics... blazen across Fox lost on ABC - is it the same story - who knows.

Posted by Wayne Mansfield at 1:54 pm