Why do we allow Cancel Culture?

I remeber quiet distincly when the term M/s was introduced and the catch cry was "I don't mind, if it doen't affected me." Well the latest case of "cancel culture" is that Australia's richest woman, Gina Rhindhert, has had her 16 minute video commenerating St Hilda'ss 125th Anniversary censored  [shortened to just 5 minutes] because it doesn't conform with the St Hildas view of climate warming [Read the Head Masters view]. The article I read put a counter view to the reason why the earth is heating up and suggested students did their own research as to the reasons if heating has occurred prior to the build up of carbon [which apparantly it has] and make up THEIR OWN MINDS rather than following the herd. Anyway, I think the schoold will rue the day it cancelled its richest ex student and greatest benefector, because the opinion did't agree with the majority. 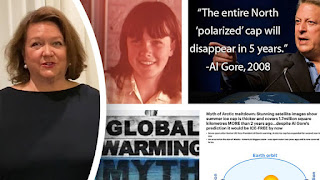 It is interesting that once something affects you you become forced to have an opinion that might be different to that which you allowed with the rationalisation "They can do what they like it doesn't affect me" attitude. Twice, I have had to review my decisions made on the basis of something not affecting me at the time and it is not pleasant.

Posted by Wayne Mansfield at 11:51 am