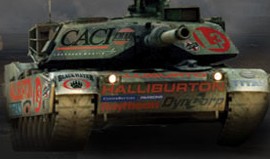 Greenwald's film talks with military personnel, past employees of military contractors, and the families of contractors who were killed in Iraq. He builds a compelling, damning case that the use of these contractors is putting American soldiers in harm's way, hurting US military effectiveness in Iraq, bilking the US taxpayer out of billions, and endangering the lives of the ex-military personnel who sign on with contractors on the promise of higher wages than those paid by the US military.

"Will things go wrong? Sure they willl, it's a war zone. But when they do, we'll fix it, we always have -- for 60 years, for both political parties."
- David J. Lesar, CEO, Halliburton
Posted by Liam Webb at 5:00 pm