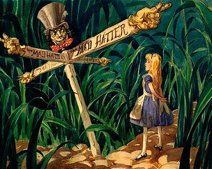 The Le Grand Palais in Paris has an exhibition called "Il Etait une Fois Walt Disney" ("Once upon a time, there was Walt Disney"), which features art that inspired the Disney artists.

And as all of you know, Disney's artists works do not pale in front of those of those masters. In fact the association is mind-boggling: if you are a layman, the quality of the concept artists' works become even more obvious and you start understanding that Walt had some really outstanding individuals working for him, that he was not the only one who drew everything and that the Studio was far from being a factory. If you are a Disney enthusiast you are bound to be stunned by connections with famous or less famous works of art from the past that you were not aware of.
Posted by Liam Webb at 11:49 am