I remeber thinking the internet would take forever to gain traction - I gave a talk on the web early on and about 50% through the talk I was met by blank stares... nobody new what I was talking about - it was 1990 and we were talking about modems, smart phones being Nokias, and fax marketing etc.... the same expressions meet me when I talk about Web 3.0 and the platform it is built on - Blockchain and NFT's - only this time the change will be swift... you won't be able to deny the changes - they will come anyway.

For example, I thought petrol cars would last forever but who would have predicted General Motors actually stopping to market cars where they had sterring wheels on the English side of the car [ Riht hand drive] - that's in Australia, New zealand, South Africa and India. Now many comanies, including GM, are only going to make electric cars from 2030 - gee that is soon [just around the corner]. 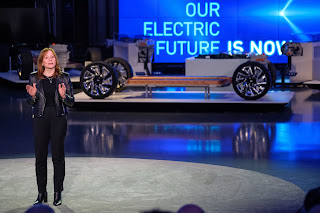 The change from Horses to Cars took a while but the change from fossil fueled cars to electric vehicles will be much quicker... there might even be a new push towards Australian manufactured cars - Heck, the pollies are already talking about that.

World trade will be done differently soon... supply chains have broken down - I heard they were established as a offset to the cold war... America shipped its jobs to China etc... those jobswill come back as two things take hold - higher wages and broken supply chains. The jobs will be different as Robots driven by ai will replace laburers producing goods but service jobs will explode so our education system will need to change for those jobs.

And the Cities Hearts often called the cbd'd will be chalenged as people work from home or decentralised spaces.

There is a simple question for you: Will you be ready!

Posted by Wayne Mansfield at 10:10 am