Two Russian reporters appear to have posted at least 30 articles to a pro-Kremlin news site, lenta.ru, on Monday criticizing Russian President Vladimir Putin’s invasion of Ukraine and his government’s suppression of critics.

CNN reviewed the articles -- which were almost immediately taken down -- some pegged to the 77th anniversary of the Soviet Union’s defeat of Nazi Germany, others criticizing the Russian leader for using Victory Day to justify his bloody onslaught into Ukraine.

Reporters Egor Polyakov and Alexandra Miroshnikova made several claims in their articles, including that Russian defense officials were “lying to relatives” about those killed in the sinking of the Russian Navy’s Black Sea Fleet flagship Moskva and accusing Putin of launching one of the "bloodiest wars of the 21st century." 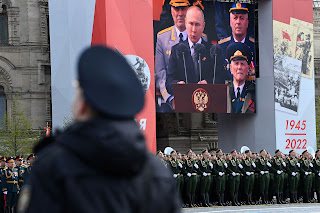 Polyakov and Miroshnikova are both business editors at lenta.ru, a major pro-Kremlin Russian news site. The outlet's parent company was recently bought by Russian Sberbank, which is subject to US sanctions for Russia’s invasion of Ukraine.

CNN reached out to the two reporters and lenta.ru for comment but did not immediately receive a response.

The Russian parliament passed a law in early March criminalizing what it considers to be falsehoods about Russia’s war in Ukraine. Breaking that law can result in a 1.5 million ruble (around $21,467) fine or up to 15 years in prison. Putin and state-owned media still refer to the full-scale ground war in Ukraine as a "special operation."

Independent Russian news site Mediazone published what it said was a statement from Polyakov and Miroshnikova after the articles appeared.

Posted by Wayne Mansfield at 3:10 pm