"Sick of it’: why so many Australians are voting early this election

A record number of Australians are voting early in the 2022 federal election, with many saying they’re “sick” of the drawn-out election campaign and want to avoid expected queues on 21 May.

Some 314,095 Australians cast their ballots on the first day of early voting this year, almost three times the 120,000 people that voted on day one of pre-poll in 2019.

As of Friday more than 1.2 million of the 17 million Australians registered to vote had already pre-polled after just four days of early voting.

The safe Nationals-held seat of Hinkler topped the list, with 18,060 early voters, followed by the marginal seats of Gilmore (16,902), Paterson (16,271) and Richmond (15,111), according to data released by the Australian Electoral Commission. 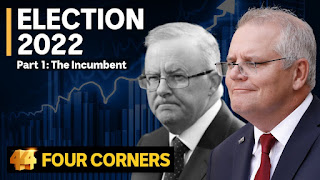 In 2021, the parliament passed legislation limiting the pre-polling period to 12 days before the election to balance the “opportunity to participate in an election as a voter with the logistic demands placed on those who participate as contestants”.

Nevertheless, the AEC said if trends continued, up to half of all votes may be cast prior to election day this year at the nations’s 550 early voting centres.

Posted by Wayne Mansfield at 2:53 pm