The Australian Football League (AFL) is the professional league of Aussie rules ‘footy’, a game that is unique to Australia. The sport has been played for over a hundred years and the AFL Grand Final held annually in Australia.

'Shirtfront' received a lot of attention after it was used by former Prime Minister Tony Abbott who said he would "shirtfront" Russian President Vladimir Putin in 2014.

According to the Oxford Australian Dictionary, a 'shirtfront' is a noun which can refer to 'a fierce tackle, usually delivered by the shoulder to the chest of an opponent'. It can also be used a verb which can refer to 'the act of delivering such a tackle'. 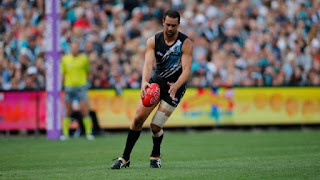 Scoring is very important in any game and in AFL, players score with goals and points.

A point can also be called a 'behind'.

When the player catches a ball, it's called a 'mark' or you can say: he's marked it which means 'caught' it. If a player takes a mark, they get a free kick.

Posted by Wayne Mansfield at 3:04 pm