Dusty snub is a serious problem for the AFL

Richmond superstar Dustin Martin’s refusal to speak to the media has sparked heated debate on player welfare and their obligations to the broadcasters who pay their salaries.

In March, Martin took personal leave following the Tigers’ Round 1 loss to Carlton to deal with the tragic death of his father in December. 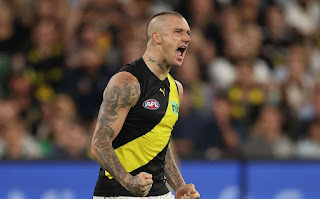 “It was great to see him back. I think the fans and the AFL in general were happy to see him step on the ground,” Richmond coach Damien Hardwick told reporters in the post-match press conference.

“It was a pretty touching moment when he kicked that goal and the whole side got to him. I’d say there were a few misty eyes in the coaches box and down below as well.

“It was a nice moment to get some reward for the hard work he‘s put in for himself. We’re pleased. He got through. He’ll get better again next week. That’s exciting for us. He is an energy guy who brings an enormous amount of spirit to our group. It’s just great to have him back.”

But when Fox Footy presenter Sarah Jones approached the three-time Norm Smith medallist for an interview after the final siren, Martin waved her off.

Posted by Wayne Mansfield at 3:35 pm