Donald Trump's presidency had a significant impact on American politics during his tenure. He brought a new level of disruption and polarization to the political scene, and his policies, statements and behavior have been controversial, and sometimes divisive.

Trump's "America First" approach to policy making and his opposition to globalization and multinational trade agreements, have reshaped the Republican party's economic positions. He also had a strong stance on immigration and building a wall on the southern border of the US. 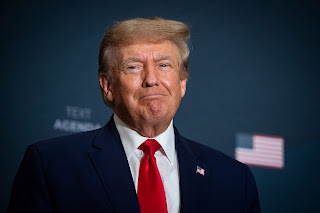 Trump's presidency also witnessed a new level of engagement from his base, who were energized by his campaign promises and unorthodox approach to politics. However, it also created a deep divide with other segments of the American population, who were critical of his rhetoric and actions.

Trump's impeachment by the House of Representatives in December 2019 and his subsequent acquittal by the Senate in February 2020, further intensified the political divisions in the country.

Trump's presidency also brought attention to the role of social media in politics, as he used platforms like Twitter to communicate directly with his base and bypass traditional media outlets.

In conclusion, Donald Trump's presidency had a profound impact on American politics, reshaping the Republican party's economic positions, creating deep divisions in the country and reshaping the political landscape.

Posted by Wayne Mansfield at 8:18 pm