Kevin O'Leary, also known as "Mr. Wonderful," is a Canadian businessman, television personality and author. He is one of the investors, or "sharks," on the popular reality TV show Shark Tank, which airs in the United States on ABC and in Canada on CBC Television.

O'Leary is the founder of O'Leary Financial Group, which includes the mutual fund company O'Shares ETFs. He is also the chairman of O'Leary Ventures, a venture capital company that focuses on technology and consumer products.

On Shark Tank, O'Leary is known for his sharp tongue and tough negotiating tactics. He is often critical of the entrepreneurs who come on the show seeking investment and is known for his catchphrase "I'm out," which he uses when he decides not to invest in a business. 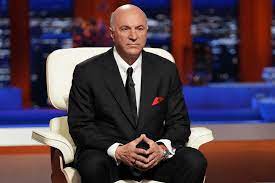 However, he is also known for his keen business acumen and has invested in a number of successful companies that have appeared on the show.

In addition to his business and television career, O'Leary is also an author and has published several books on personal finance and investing.

Posted by Wayne Mansfield at 6:25 pm