"Kath & Kim" is a popular Australian television sitcom that aired from 2002 to 2007, and later returned for a fourth season in 2012. The show, created by Jane Turner and Gina Riley, centers around the lives of Kath Day-Knight, a middle-aged suburban housewife, and her daughter Kim Craig, a shopping-obsessed and self-absorbed woman.

The show was critically acclaimed and became a cultural phenomenon in Australia, known for its sharp wit and satire of suburban life and Australian culture. The show's characters and their catchphrases, such as "look at moi" and "I'm Kath and I'm here" became well-known and are still remembered. 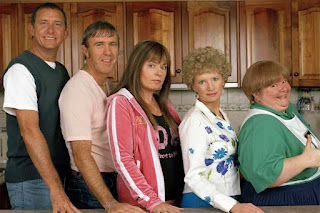 The show also had an impact on the Australian psyche by challenging and poking fun at the traditional stereotypes of suburban life and the Australian identity. The show's depiction of the characters' lives and their struggles with everyday issues such as work, relationships, and consumer culture resonated with a lot of people and helped to redefine the image of the typical Australian family.

In addition, the show also showcased the talents of its female lead actors, Jane Turner and Gina Riley, who wrote, produced and starred in the show. It also helped to promote and inspire other female writers, actors and creators in the Australian entertainment industry.

Overall, "Kath & Kim" had a significant impact on the Australian psyche and culture through its unique and comedic take on suburban life and the Australian identity. It continues to be remembered and celebrated as a classic piece of Australian comedy.

Posted by Wayne Mansfield at 8:27 pm