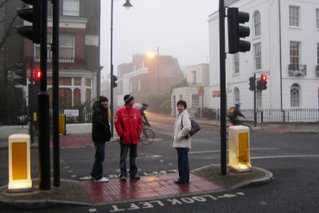 Were we lucky or what! Heathrow is fogged in for the next few days but as we arrived last night they were letting planes already in the air land. And after a welcoming from the Customs, with a comment about the cricket from the young man at the counter, we were through and greeted by Erica and Cliff.

It was then on the tube to Kings Cross. All a bit like home really - inside a plane for hours, into a taxi in the dark, but this time a train under the ground, and on our way.

A group next to us were complaining about waiting for 5 hours and then being turned away with no luggage and told to come back tomorrow. The significance of this wasn't to become apparent until the early morning news where details of the effect of the smog was being discussed every minute on the minute - 350 flights cancelled in the first few hours.

When we decided to venture down to Upper Street Islington at 8.30 the next morning for a coffee and a lok around is was like a dark winery night with thick fog and a 1 degree bit to the air.