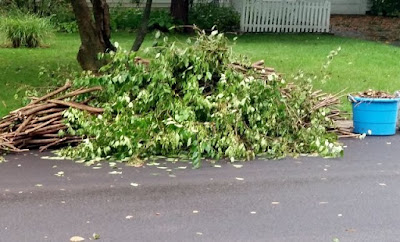 One of the questions often asked by check out staff [ no self sever for us! ]when Joanne and I go shopping on a Saturday is "Have you got lots planned for the weekend?"
My stock answer is "I don't plan, I just follow Joanne's list!"
Well the list was long this weekend and I actually made it to the end... it was long because there is a council green waste pick up and we have a large [ by modern standards ] backyard which is a garden. we have trees to trim, roses to prune,hedges to thin and a reluctant olive tree, which refused to fruit, to remove and Joanne's tax return!
I made the mistake of starting the list on Sunday before having my after walk shower shave and sheeez... and when the olive tree finally admitted defeat it was dark and after the evening meal time... I think I finally had my "morning " shower at 7pm.
And fearing the worse, I started Joanne's tax, and if you haven't realised big brother is watching, have a look at what the tax department already fills in on your "prepopulate" tax return.... well it took less than 15 minutes and the list was DONE!! by 7.30 pm and Wayne was totally exhausted... but in the corner Joanne was already working on this weekends list!