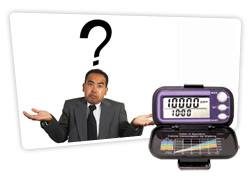 
I do on 5 days a week 10 kilometres of walking and have felt good about it... but on the "rush" days when things need to be done early I only do a 20 minutes walk to and from my Coffee Office and I have been feeling bad about that! [ Self critique is worse than public! ]
Well I just happened to catch Michel Moseley's Show on Getting Fit and he helped me feel better about myself... firstly, where did 10000 steps come from:
"... where did that figure come from?
You might be surprised to hear it was the result of a 1960s marketing campaign in Japan.
In the run-up to the 1964 Tokyo Olympics, a company came up with a device which they started marketing to the health-conscious.
It was called a Manpo-Kei. In Japanese, "man" means 10,000, "po" means steps and "kei" means meter. So it was, literally, a 10,000 steps meter."
So, after 10000 steps it reset. Hench, your goal should be to do 10,000 steps. Science caught up and said that people who did 10000 steps got healthier than people who didn't... doooh. Recent science says the ideal number is 13,000 [ Hence my 10 kilometre walk 5 days a week. ]
Moseley's program found that even with good intentiona 10000 steps is sometimes difficult to fit in and he and scientists tested the health benefits of a brisk 10 minute walk 3 times a day.
The brisk short walk had the same or better results as the 10000 steps and people found it easier to fit it into their schedule - before and after work and during a meal break.
I feel so much better now on my short walk days - I have just speed up and do a brisk walk for up to 20 minutes each way. It is only 5000 steps but it feels so much better!
So, a long walk is out of the question?? Just do a 10 minute walk at a faster than normal pace [ how fast?? Get the sweat running and that is fast enough ]
#WayneMansfield #Rebootology #BusinessSeminarsAustralia
Posted by Wayne Mansfield at 9:33 am