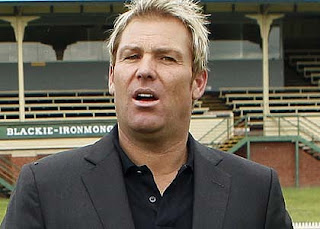 The high profile chat show WARNIE has been pulled.

With Australia doing so well NOT in the Test cricket, viewers have deserted the tele when it comes to anything to do with Test Cricket - we Aussies dont like watching the poms thrash us. So, Channel 9 have decided that 500,000 viewers is not enough to justify putting the Spin King on tonight... you'd have to think that the show was pretty much done apart from the audience part so they were happy to burn some $$$'s rather than produce a fully sponsored "replacement hair" ad...

A friend of mine, an accountant none the less, says that Shane Warne is so adept at Self Promotion he will be one f the very few TV Presenters to get the axe that will make it a positive... after all how could he have pulled Liz Hurley?? Maybe he didn't and it was all a put up??

As he said, "Nobody could be as dumb as Warnie... it is all a perfectly staged media show."
Posted by Wayne Mansfield at 6:53 am