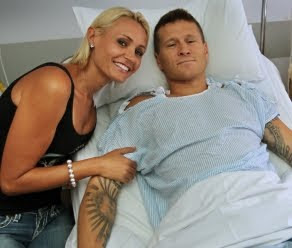 Quoted in The West Australian this morning, as the full picture comes out about Green trying to bully hospital staff to give him morphine for acute pain BEFORE they had time to diagnose the cause of the pain:

"I wasn't ranting and screaming," he said from St John of God Hospital, Murdoch, where he had surgery on Wednesday. "Considering how much pain I was in and the lack of common sense shown, I thought I was very controlled and I have no idea why anyone would be called, let alone the police."

So obnoxious was Green's behaviour, the hospital called the Police but Green was on his way before they arrived.

"You just do not give morphine to an undiagnosed abdominal pain, it is the last thing you give because what it does is camouflage the symptoms and sometimes you miss a diagnosis," Dr Hames said.
"The reality is Danny was only in that hospital half an hour, he really didn't give them much of a chance, did he?"
Posted by Wayne Mansfield at 8:00 am