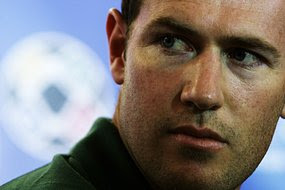 Key Socceroos playmaker Brett Emerton will miss Australia's quarter-final at the Asian Cup after being shown a second yellow card in the group stage.

It was the sour note of a 1-0 victory over Bahrain that ensured the team top place in Group C ahead of South Korea.

In the 41st minute of the match Emerton was spied by Japanese referee Yuichi Nishimura tugging the shirt of an opponent in the midfield.

It was a needless act. A clear free kick. But in Emerton's view a tough booking.

"I think it was very soft," the Blackburn midfielder told Grandstand. "There were a lot of challenges throughout the game which warranted yellow cards rather than a little tug on the shirt.

"That's sometimes what you experience playing in Asia. If that was in the Premiership it would never be a yellow card. It's just one of those things I have to accept it, serve the suspension and hopefully be there in the semi-finals with the boys."

see rest of article on ABC Online
Posted by Wayne Mansfield at 2:36 pm