It is the death of mail?

It is the death of mail? 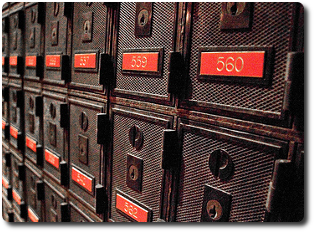 Some 30 plus years ago I paid for a PO Box in Northbridge - I think it was PO 77. My office was close handy and it served me well until I needed a bigger PO Box - still at Northbridge but the Post Office was in a new building, it moved from Aberdeen Street to Francis Street but no matter it was still Northbridge... at the time it was 6000 - it said it was the city but it had parking.

There were some more changes along the way - a new postcode 6865 and the ever-increasing price from less than a $1 a week to nearly $10... but a strange thing happened. The original building in Aberdeen street became a night club [ called ironically The Post Office] the cost of mail kept rising, and email became ubiquitous. The General Post Office in Forrest Place Perth... the 6000 Postcode, became a restored building, no post office but a beautiful H & M Store.

That original PO in Northbridge is now vacant because people have now stopped going to night clubs however it can't be redeveloped as it is "heritage Listed" as an example of a significant historical building from a time long since passed when we used to send Mail.

Northbridge became the new home of the GPO and the price rose again.

I no longer had an office, or street address - you don't need those in 2019 [actually the 21st century] Parking disappeared from Francis Street and fewer people sent me stuff. What was I do?

Businesses still wanted a postal address - there was a space for that on the "data capture screen". So I got a PO Box at my closest Post Office Morley and the price was a lot less but now less than $3 a week and in the 18 months I have had one I have got just 1 REAL letter - the new plastic card for my bank card.

I am wondering why that field is still on the data capture form.

I succumbed yesterday and found out the price of a new smaller box because I need a postal address for some stuff... the physical drivers licence, a new frequent Flyer card and some other old world stuff... and it feels invasive to put my actual address in that data capture box... a place that only people chasing you want to know.

The local Postie used to come "late" because there was so much mail but now the postie comes every other day because sometimes there is NO mail - especially since the Post Office Raised prices because they are losing money on delivering mail.

So I have a question... has mail died and we have buried it yet?
#waynemansfield
#Progress 2019
#Reflections
#WaynesLaw

Posted by Wayne Mansfield at 4:54 am