Feedback - How to handle it

The Value of Ratings 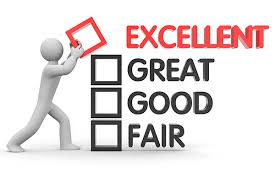 According to Seth Godin, Guru of everything, rating means very little. In fact, all of his blog entries have comments [ feedback ]turned off. His logic is that the only person upset by poor ratings is you but really a majority could be favourable but we focus on the negative.

so here is how I am conflicted... for my sessions I have feedback forms and for the session on Tuesday there were 17 attendees and we [ I ] got back 15 rating sheets with the lowest rating being 7/10, most 9/10 and many 10/10 and the 2 who didn't complete a review form - they said it was shit, the worst they had ever been to - give me back the money.

I tried to recall why we get the forms... to address the pressure on people to give feedback to their boss "What did you learn?" and when put on the awkward spot of speaking in front of a group it is easier to say "I learnt nothing" than to talk in front of the group.

So, the conundrum - no refund terms are offered in fact the terms say ALL SALES ARE FINAL... do I stop worrying?