Kevin O’Leary was born to a middle class family in 1954. The combination of Kevin’s mother’s family heritage as merchants and his father’s Irish charisma truly meant that O’Leary was born for business. Kevin learned most of his business intuition from his mother. She taught him key business and financial insights from an early age. These became Kevin’s core philosophies, and the pillars upon which he would one day build his empire.

Kevin’s approach to business went through major changes as a teenager. During his second day on the job at a local ice cream shop, his boss came into the front of the store where Kevin was scooping ice cream. She looked at Kevin and asked him to perform a task that he wasn’t expecting. What happened next had a profound effect on Kevin – one that stayed with him for the rest of his life. 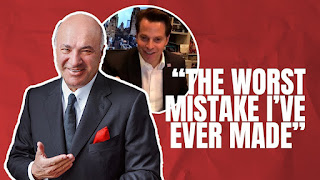 Posted by Wayne Mansfield at 11:02 pm