During the gold rush, a man who had been mining in Colorado for several months quit his job, as he hadn’t struck gold yet and the work was becoming tiresome.  He sold his equipment to another man who resumed mining where it had been left off. The new miner was advised by his engineer that there was gold only three feet away from where the first miner stopped digging.

The engineer was right, which means the first miner was a mere three feet away from striking gold before he quit. 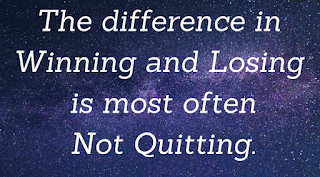 When things start to get hard, try to persevere through the adversity. Many people give up on following their dreams because the work becomes too difficult, tedious, or tiresome–but often, you’re closer to the finish line than you may think, and if you push just a little harder, you will succeed.

Posted by Wayne Mansfield at 3:17 pm