Perth has a Public Holiday today!! I think it is called "the Queens Birhday" - it is NOT but hey we need a name... not like the vics who had Friday off and called it tyhe AFL Final holiday... They also have one for the Melbourne Cup.... Pity they are also in Lock down.

I often wondered what the Spanish Flu time was like.... we still have a flu shot to ward off the flu BUT did you know San Francisco had a Freedom day in 1919 when they could legally stop wearing a msk only to be caught by the 2nd wave. 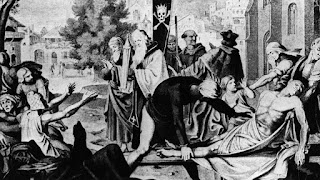 The balck plague wiped out 60% of Europe's polulation and can loosely be credited with starting the Salve Trade as Serfs demanded paymeor labour where as pre-plague they worked for free.

Posted by Wayne Mansfield at 9:48 am