Among the Daffodils by Erik Rittenberry 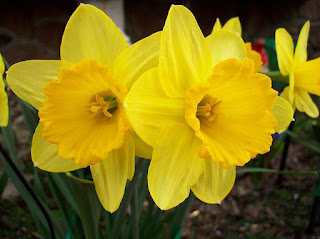 My face is beginning to show the battle scars of time. My heart seems to care less for things I once held as relevant.
As the years unravel, things make less sense.
The hangovers last a few days now instead of a few hours.
Beautiful dreams once lucid are now blurred. The idea of
God weakens with every atrocious deed I see in the world.
Politics is a hopeless endeavour, just like our obscene habit of obedience. The debt bubble we’ve swallowed as “prosperity”, is on the verge. The wars have grown tiresome, nobody cares about them anymore.
Everybody is trying to sell a lifestyle; they want you to live like them; they want you to buy their life-changing product or get behind their great cause; they have the secret, they say, just follow them.
The church wants confessions but I think we’re all out. The witless hipsters ride vintage bikes on Perth sidewalks to coffee shops that were once brothels and asylums.
Overmedicated & indebted men find it difficult to have conversations beyond their jobs or football. Women do yoga on weekends and gossip on long walks about husbands who’ve lost that intestinal fortitude.
The 88-year-old man, with his retirement and dignity, wasted away by inflation, bags groceries at the corner supermarket to pay for his myriad of medications.
The dogs have grown bored of their masters. The cats gave up on us long ago. The sparrows flutter higher in the sky than they used to.
The books of Whitman, Emerson and Thoreau sit dusty on bookshelves as the television scorches and burns.
Where’s the promise of victory?
We’re being led somewhere by the outside far away from the treasure inside.
As the tribes’ march in lockstep to their ordered destination, I lie in the meadow just beyond the bloody streams surrounded by golden daffodils, and as the rain rinses me of oblivion, I’m lifted from the hollow abyss into the universal radiance where the five senses become one.

Originally Published in Rebootology
Posted by Wayne Mansfield at 5:25 pm