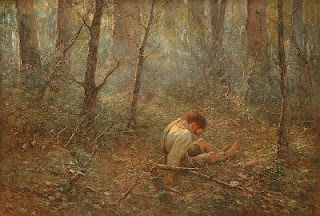 There is a heart-wrenching story on today's news mediums of two very young boys who went missing and have been found dead and I wonder what will happen to little ones actually being allowed to explore on their own?

My very young life was spent in a different time and a different place - the 1950s and 1960s Margaret River. I remember many hours playing war games on the banks of the Margaret River which was immediately behind our house. My mother, I am sure worried about me, but when pressed, she would say... "He will come home when he is hungry" which I usually did.

As a teenager, I was dropped off at the mouth of the Margaret River about 9am and picked up at 4pm being able to surf, swim or explore without supervision or company.

I am sure very few kids of the 21st Century have those adventures or freedom - I continue that spirit by walking 10 kilometres every morning in cities I visit as I travel which have included Los Angeloe, London, Rome, Barcelona, Naples, Doha, Sydney, Brisbane and all points in between.

I have to remind myself that our front door should be locked... don't do that and your insurance won't pay!

Who or what's to blame for us becoming wimps?? My thoughts are social programs such as "Stranger Danger" and "Neighbourhood Watch". Do you, your kids or grandkids ride a bike to school as I did... or did you give up riding when it became law to wear a helmet?
Posted by Wayne Mansfield at 6:02 am